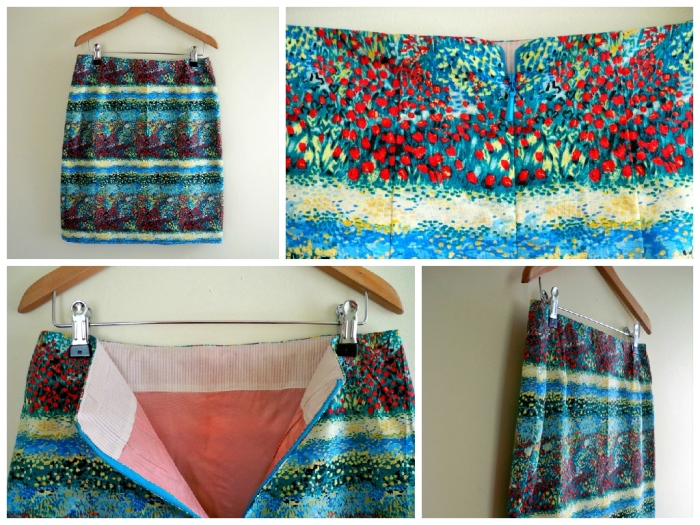 I’ll ‘fess up here; I don’t know if I’ve actually worn three self-sewn items this week. I know that I’ve definitely worn two (the above skirt and some pants I sewed years back on my C&G Lingerie course), but I can’t remember if I’ve also worn some more recently made underwear.

Why? Because my washing machine broke down on Wednesday, and I’ve allowed myself to be caught up in entirely domestic things instead (like getting that sorted, the repairman is due Tuesday. Tuesday! A week for a repair to a machine that’s still within its first year of warranty! At this rate, I’ll have to sew myself some new knickers, just so I can last out until I can do laundry again…)

It HAS been warm enough to wear a skirt, though. Hallelujah! And, what’s more, THIS skirt. Which has such a sweet print, don’t you think?

If something’s beyond my purse, I have a bad habit. I’ll buy just a little bit of something, rather than walk away. I now have half or one metre lengths of everything you can possibly imagine (and a few more I’d really rather sooner you didn’t). Of course, finding a USE for the odd half-metre when I don’t do any patch-working, is neither here nor there, sigh…

So here it was, barely-over-half-a-metre of this cute 45″ patch-working cotton, sitting in my stash ever since I bought it years earlier (and I’m talking YEARS) at a local quilt exhibition and passing fabric fair.

To compensate for my bad buying habits, I do have this in my favour; I’m kinda tiny. With my 34.5″ hips and diminutive stature (the hangers I use to photograph my garments on are a couple of inches narrower than the hangers you see in the shops), I can just about get a garment out of half a metre of fabric, if I’m careful.

I self-drafted a standard skirt pattern when I took the first year of a C&G Fashion course over a decade ago. When I made up a toile from that original pattern last month I discovered I needed to let it out a bit. Ha.

I traced around my original sloper, adding a couple of centimetres on the seams for Version 1, 2015. Then measured it again. Not big enough, despite my careful calculations. Balls. So I traced it out again; Version 2. Laid the pattern on the fabric. Just wide enough!

Quickly drafting a facing, I set to work. I used this great Threads article to create the lining and facing  and checked the fit as I went along. And guess what? The damn thing was too big! I should have used the first version I traced off. BALLS.

And despite taking in the side seams to make it the size of my Version 1 pattern, it’s STILL too big when I wear it *pinches out another cm or two each side*; I have a habit of making stuff a little bigger, because I figure I won’t grow out of it so fast. Which is dumb because I’ve put on about 3lbs since 2004 BUT ANYWAY…

(I also find I can fit a concealed zip more easily and happily than a regular kind of zip now, too, but I get stuck with how to finish it at the top of a garment. Any tips on that, folks?)

But despite the couple of niggles, I love it. It’s cute, it’s fun, it looks AMAZING with my red opaque tights, AND I accidentally have enough room for a stonking great dinner. WIN.

All I need now is a suitable garden to party in 🙂

One thought on “Garden Party”