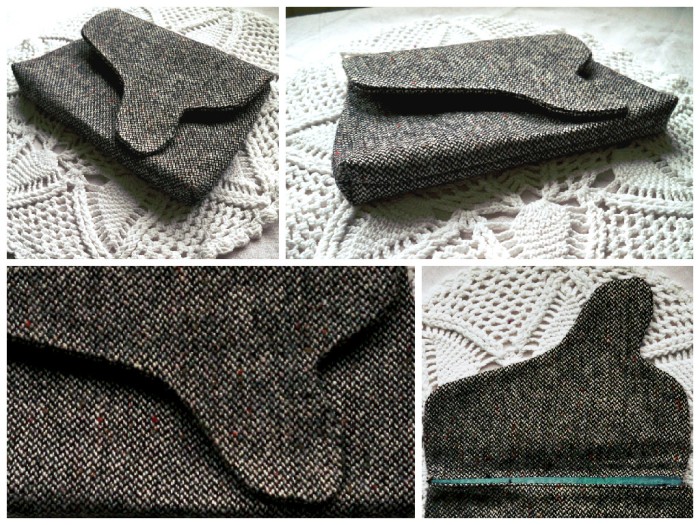 There I was, on the 1st of January 2015, saying I would ‘sew and blog more’. And how much have I blogged since that declaration?

Perhaps I was burnt-out after my mad sewing frenzy in December 2014, but I’ve barely picked up a needle until the last week or so. That, and I’ve found myself caught up in other, non-sewing-related, projects. I’ve always loved to sew, but I’ve just felt too damn exhausted.

Finally, over Easter, I started to sew again. And I’ll get around to blogging about my exploits shortly. But first, a catch-up on two of the items I sewed in my pre-Christmas mad-frenzy. Yeah. That one. The one that put me off sewing for four months…

The above is a cute tweed purse, made from a brilliant pattern in Emma Brennan’s Making Vintage Bags: 20 Original Sewing Patterns for Vintage Bags and Purses. I loved this 1920’s style clutch pattern from the moment I bought the book (or, wait, was it a gift? Damn, it’s been a while…), but I’ve never sewn anything from this lovely book. Until now. 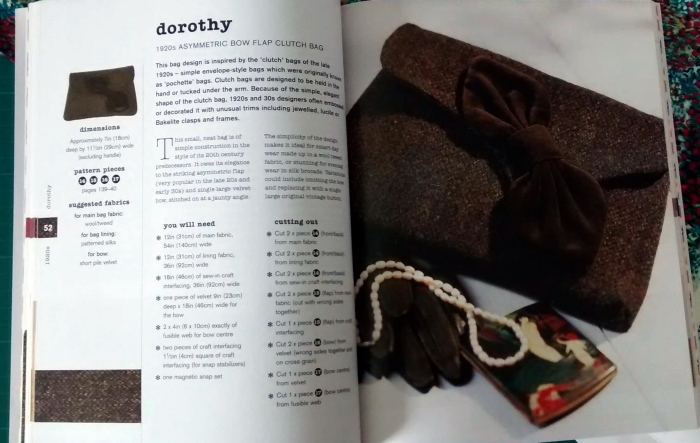 I have a friend who’s into vintage, into handbags, and into customising and sewing. So, naturally, we have nothing in common. LOLZ. I made this little purse as a Christmas present for her, because she was making so many gifts for other people at the time, I thought it might be nice if someone made HER something for a change.

I couldn’t photocopy it to enlarge the pattern, so it’s smaller than the original above. I also left it plain, because I know how she likes to add felt, beads, baubles and oojamaflips and, frankly, there’s no way I can compete on that kinda level. So I left the velvet bow off to create a wintery blank-canvas. If I manage to take a photo of it now she’s pimped it up I will but, suffice it to say, she’s made it look amazing.

But the purist in my still has a soft spot for plain, unadulterated tweed. How about you?