OK, so one of 2015’s resolutions is going to be .. to blog more often. Or, at least, right after a garment has been finished…

I’m gonna give myself some slack for December 2014, though, as I completed not one, not two, but THREE Christmas gifts for others (and am half-way through another project, to boot) .. so last month was spent actually MAKING things to blog about, at least.

(Yep, in sewing these three items I SMASHED through my 2014 resolution of a monthly sewing project, like the #SewingSheHulk I TRULY AM)

I’d long coveted Cynthia Rowley’s (bizarrely out-of-print) Simplicity 2192 pattern and, after months of trying to work out how to best sew it for my own selfish needs (HA), I chose it as my mum’s Christmas present. 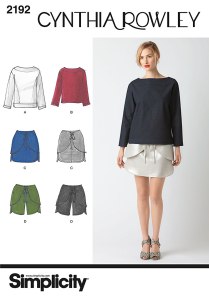 (It was her own damn fault, she mentioned she wanted a jumper…)

Knowing her wardrobe involves lots of navies, purples and burgundies, I thought I’d make something that’d co-ordinate with her existing wardrobe AND could be dressed up with a skirt or dressed down with jeans. I am a very thoughtful daughter like that.

So this mid-weight quilted cloqué jersey in midnight blue looked perfect (hurray for Ebay). I worried it would be too stiff for the whole garment, however, so plumped for this dark purple ponte jersey for the sleeves and facings instead. Navy and purple? WIN.

Me being me, of course, I had to take the long way around when sewing it;

It was almost a success. Almost. Mum has such narrow shoulders that it kept slipping off, and the off-the-shoulder look .. yeah, not her thing, weirdly. She liked the fabric, but her first response was, ‘is it a coat?’ as the dense cloqué PLUS the thin jersey made it kinda .. coat-y. Or at least jacket-y.

I offered to make alterations when she came to stay, to slice it up the front and turn it into a jacket (hell, it seemed like it was halfway there already), but the remedy to the too-wide neck was simple; a pair of inserts at both sides of the slash neck. It now looks like she’s wearing a coordinating top underneath and, with sleeves and hem facing in the same fabric, looks like it was supposed to be like that all along. Another of those ‘design features’ *coughs*…

As I had plenty of the purple ponte left over, I decided to quickly knock-up a matching skirt for her, too. Which I threw together yesterday afternoon, using the maxi skirt tutorial I stumbled upon previously. Which means *sudden realisation face* I actually sewed FOUR garments in December 2014!!

A New Year, a new outfit for my mum and, given the skirt I made needs no elastic to keep it up, the perfect outfit for a New Year’s Day blow-out roast lunch *gives Domestic Goddess badge a huff and a polish*.

Here’s to 2015 being just as productive!