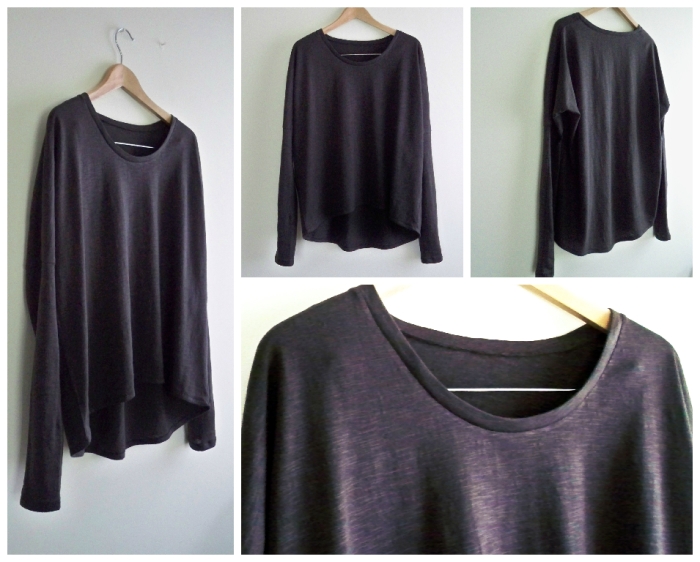 I managed to sew a handful of things last month. And have utterly FAILED to write about ANY OF THEM.

So this little number was sewn in August, actually. Yeah I know, look at it, it’s SO DAMN SUMMERY…

No sooner had my kilo-weight of Simplicity patterns arrived than a realisation struck; I needed something to pair with my wardrobe’s exceedingly ridiculous leg wear (the most outlandish? Leggings featuring a photo-realistic image of a cat’s face. No, I’m not showing you a photo. Yes, I know how old I am. SHURRUP YOU ARE NOT THE BOSS OF ME etc).

In my stash I had some slubby, drapey, content-unknown charcoal grey jersey. I think it’s viscose. TBH I bought it because it was cheap and I thought, ‘yeah, I’ll probably make SOMETHING useful out of it…’

(I had my colours ‘done’ once. I have a little wallet which reminds me that dark greys are ‘excellent’ on me…)

Simplicity 1463 was the obvious choice to balance out the skinny-legged item I was building an outfit around; loose fit, high-low hemline (meaning, GREAT ARSE COVERAGE), and quick to cut and sew.

And I mean really quick to sew. I ran this little number up in about a day. And that was despite doing it a leeeeetle bit differently…

That the sleeves fitted despite my speculative pattern-folding proves I’m a lucky bugger. Especially with the tiny upper arm seam I’d created, which is made for someone who’s a size 4 in patterns (about a zero in RTW).

Luckily I have the kind of arms where the pre-meeting memo about giving me muscles got lost in the internal mail, so it fits. BEAUTIFULLY. Like the jammy, puny, git I am.

The end result is unexpectedly marvellous. OK, it doesn’t look much on the hanger, I grant you. But when it’s on? It’s the meeting point between Eileen Fisher and Jo Brand’s early stage wear, and I mean that as a genuine compliment.

Despite being quite the short-arse I didn’t make a length adjustment so it prevents any potential camel-toe incidents at the front, it covers my bum at the back, and it allows just a teeny glimpse of my cheeky cheeks from the side. TALL COOL GLASSES OF WIN ALL ROUND.

As a lover of brightly-coloured skinny jeans and so forth, I keep finding new things to pair with it. Not only but also, it came out of the wash beautifully and doesn’t need a flick of the iron.

I’ve already worn it out to two ‘events’ so far (it looks amazing with a grey cord and Persian orange bead necklace I made last month) and I felt both casual AND elegant in it. I immediately hankered after a navy version and, to my absolute delight, I’ve discovered I have a near-identical version of the fabric in a dark inky-blue already in my stash. Yep, another one is surely on its way.

I sense both Jo and Eileen would be proud.

One thought on “Slouching towards essentialness”