This is SO LATE…

My ‘project a month’ plan hit the skids in a serious manner with the above; a doll for my friends’ daughter. Not only did this not get finished before the end of June, but it was actually supposed to be for their daughter’s birthday .. back in March.

Given I already had a project for another little girl in March *cough*, and knowing how laid back her parents are, I decided that it was better to take my time to do this properly than stress about it being late.

(Sewing’s supposed to be fun, you know…)

The Simplicity 1900 Doll Pattern came free with June edition of Sew Magazine and I fell in love with her immediately; so neat, so cute and, if either the little girl or her mother wore her hair in bunches, they’d be a dead ringer for her.

I made a couple of alterations, of course. For a start, I made my doll a very different outfit; a shirt and pair of shorts from the little boy doll version, topped by a swish 1950s style coat (based on one of the dress patterns), so some button-fastening practise could take place.

The trousers were due to be dungarees but, when I completed them, they just looked crap; far too big in the waist and far too short in the body. Bugger. So I added a waistband, chucked in some elastic and voila; she can now go scampering. Tomboy, ahoy.

The coat was made purely because her mum had asked for something with buttons, so her daughter could learn how to fasten them; it soon became a work of love, though. Contrast bias binding inside the neck edge, hand stitching, all-in-one facings; seriously, I’m tempted to make one for myself… 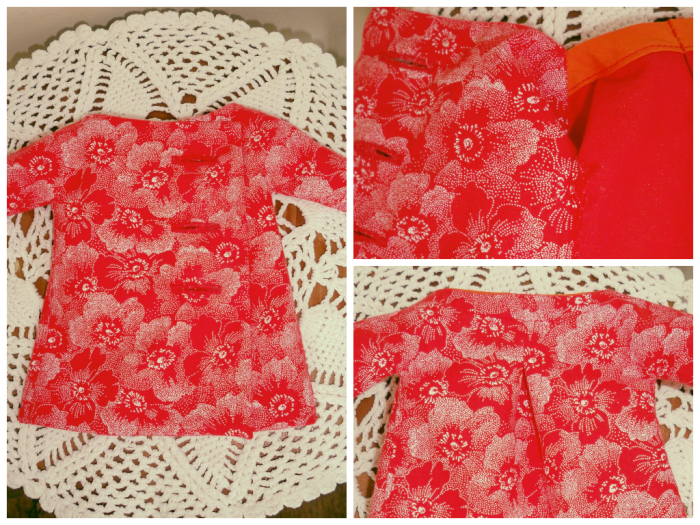 If I had to change anything? More stuffing in the main body. Her face doesn’t look as good as it does on the front of the pattern, damn it. It took AGES to sew as I’ve never made anything like this before (just embroidering her face, a new skill for me, took all afternoon – it was SO TOUGH to get her eyes to match and I’m pretty-sure they’re still a tad squiffy).

Plus, it was an absolute nightmare to turn and stuff those super-skinny limbs. I’m not sure if I’ll ever make one again.

But the main question to be answered is; did the intended recipient like it?

She’s 21-months’ old; she was more interested in spotting the fish in a local pond and looking at photos on her dad’s iPhone. Her mum and dad, however, LOVED IT; her mum clutched it to her bosom and grinned, ‘Mine!’ Right after saying that, actually, it reminded them of ME and christened her with my name (something about those skinny limbs..?)

That still counts as a win, though, right?? 🙂